Thanks to all of those who made this V edition possible

A few days ago we sent an email to all of the participants to show our sincere gratitude for trusting in Gran Canaria Natural and Active Association and participating in the routes. We would like to relive the experience we have enjoyed.

We started at midday heading towards the Finca de Osorio route in order to celebrate the 100th anniversary of Aguas de Teror, a bottled water brand. We were glad to benefit from a wonderful walk and a great weather. The route finished with a food tasting at la Casa del Borbullón in Teror. Aguas de Teror (sponsors of the Centenary of Teror Spring Water route) delighted us with cheeses, wines and local sweets. The day ended with a speech from Inés Jiménez, Tourism Counselor, and a draw that we were able to offer thanks to different partners on all routes.

Click here if you wish to read the press release of the first day.

We all had to wake up early on Thursday. Fataga was our starting point, walking through some beautiful paths heading towards La Fortaleza. When we arrived in Fataga, our colleagues distributed some snacks bags, which were full of a different variety of products. Those snack bags made the path more pleasant.
Once at La Fortaleza, their archaeologists explained in detail the area. The Council of Santa Lucía shared some savory Canarian snacks which involved roasted pork, “papas arrugadas” and many more.
We also took a funny group photo and ended up with another draw.

Click here if you wish to read the press release of the first day.

Although rain was expected, we were lucky enough to enjoy a sunny day. #LaurisilvaRoute took place that day. We had to cross several ravines and hikers could benefit from the typical vegetation of ancient laurel forests. This path started at la Laguna de Valleseco and ended at Firgas. The amazing pictures, posted in our social media, show the wonderful day we experienced.

The endpoint of the route was located at Hotel Melva Suite (Gran Canaria Natural and Active affiliate) which, as well as other partners, offered us a food tasting. All hikers (more than a hundred of them) were satisfied. We also had the opportunity to get both a leg massage (thanks to Begoña Ferrero massage school), as well as winning an amazing prize of the held draw.

Rain was also expected on Saturday. The ground was still wet from the previous night. However, we were lucky enough to enjoy delightful weather once again.
La Cruz de Tejeda was our starting point, up to the village of Artenara. Snacks were offered at the village’s square thanks to Artenara's Council. Once the route was done, all of the participants, who had booked the accommodation at Garañón, were taken to the camp-site.
Once they arrived at Garañón and before dinner, they had a good time with some activities:
a speech from Javi Cruz who is a well-known alpinist, an opportunity to get a massage thanks to Begoña Ferrero massage school, a coffee break at one of the rooms and a delicious dinner at the canteen.

The Astronomical Night Routes were held during Friday and Saturday. Participants could enjoy one of the world’s best skies, guided by Francisco Rodríguez (Astroeduca) who described and pointed out what the hikers had to look at. 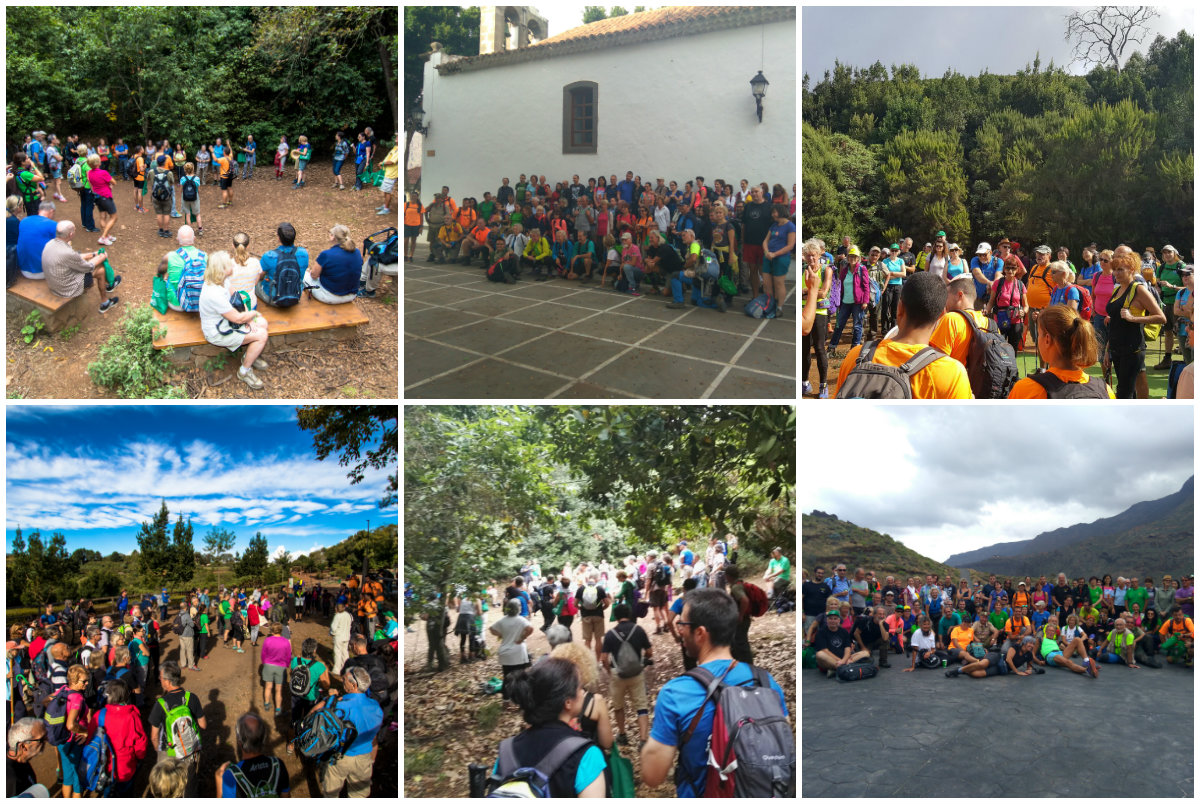 Sunday was the last day of the Festival. We kicked off early in the morning heading towards the highest point of the island, el Pico de las Nieves. The soft rain didn’t stop us at all. As the previous routes, participants received an incredible snack bag, making the path more pleasant.

Once back at Garañón’s camp site, geologist Luna Adrados delivered an informative speech about the structure of the island.
To conclude the Festival the best way possible, we held a party with the Parranda de Tenoya. The food was borne by Vivac Aventura.
Certainly, the V edition of the Gran Canaria Walking Festival has set the bar high, but we’ll try to improve it.

Clic here if you wish to read in detail the last press release. 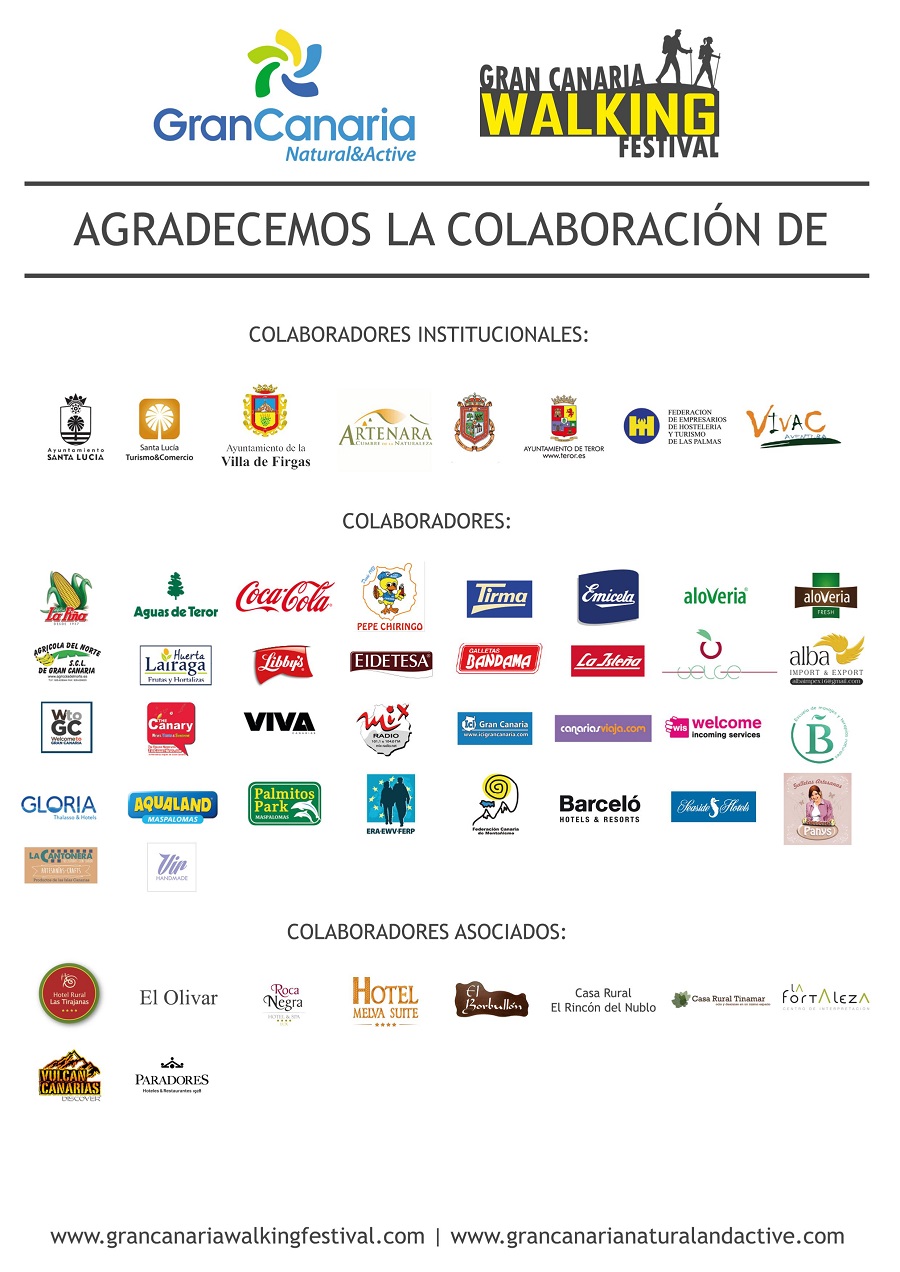 Two weeks after the Festival took place; we keep smiling when we remember the event and how we enjoyed it. We have received many recognitions and positive comments from the participants. We are willing to start preparing the upcoming VI edition of our Gran Canaria Walking Festival. Are you going to miss it?